Almost a year and a half after I left my bicycle in Istanbul and returned home, on March 29 I flew back to Turkey, aiming to close the circle that I had started far back in June 2016 …... Read More

On June 1st, 2016 – “THE DAY BEFORE” – I wrote this. The next day I started a Travel Diary. I could not know, by that time, that it would last 304 days. It started like this … 2 June, Milan ◀ Day 1 🇮🇹 ▶ I’m leaving for an interstellar cycling journey, and what’s the first step? Milan central station. To take a train. Intermodality mood = ON Someday I’ll do it in the right way, I promise. [caption id="attachment_2599" align="aligncenter" width="300"] 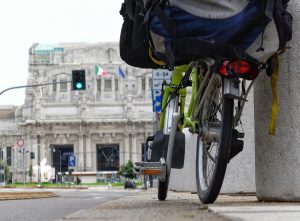 [ 2 June 2016 ] Milan. Central Station. 11 am.[/caption]3 June, around Brescia ◀ Day 2 🇮🇹 ▶ The adventure started, but still I have to find the rhythm and then let it flow. This time everything will go slower. Not in a hurry indeed. The first 2 days are around Brescia, where I’ve been working for about 8 years, greeting friends. Loaded – in all the ways – and with that best-days-expression on my face: “but what the hell came up into my mind?!” [caption id="attachment_2600" align="aligncenter" width="300"] 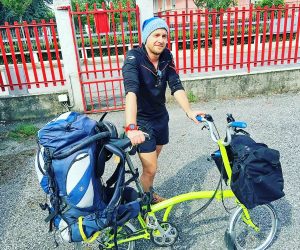 [ 2 June 2016 ] Cologne (BS). 4 pm.[/caption]4 June, Garda Lake ◀ Day 3 🇮🇹 ▶ I thought: “on Saturday the 4th I’ll pedal Brescia – Verona, so to stop somewhere on Garda lake to have a swim.” Desenzano del Garda. 1 pm. Under a shelter, waiting for the angels to stop throwing water bombs on me. After many rainy hours, the sun came out. It’s not warm, but the sun came out. And this means swim time for me, even if Verona is quite distant still. [caption id="attachment_2601" align="aligncenter" width="300"] 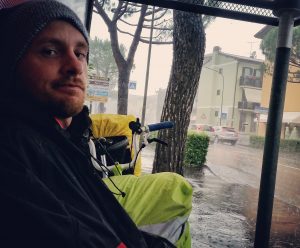 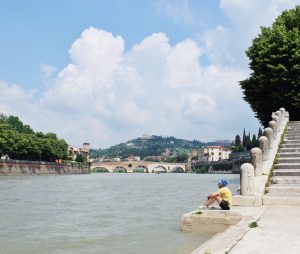 [ 5 June 2016 ] Verona. 11 am.[/caption]To get in Mestre around dusk and being invited by the friend hosting you to spend the evening with some colleagues, barbecue and wine in Forte Marghera. To find out you arrived in a Bayou in Louisiana. [caption id="attachment_2603" align="aligncenter" width="300"] 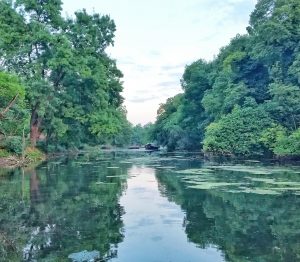 [ 5 June 2016 ] Forte Marghera (Venice). 9 pm.[/caption]6 June, Mestre ◀ Day 5 🇮🇹 ▶ Groups embarkation, ship visits, meeting … many times I drove a car, on this bridge, to enter the Laguna. 5 barren kms, surrounded by the sea, track-straight and to be driven under 70 kms/h speed. My sight, when entering, towards the ships. When going out, on my turn-up shirt, beating on the wheel while listening to music. “Someday I’ll run all over it” – I was telling myself every time, catching a fine every now and then. Actually I never ran on it. But today I’m passing it with a bicycle, wishing I could rear up. If only I was able to do that. [caption id="attachment_2604" align="aligncenter" width="300"] 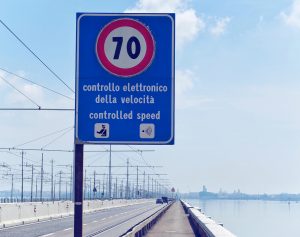 [ 6 June 2016 ] Venice. Ponte della Libertà. 12,30 am.[/caption]Sometimes, when I pedal – even if I’m taking everything slowly – the sun explodes, hard and fierce. It’s almost summer, I know it, but still I get ambushed. Soon I guess I’ll buy a hat, or a panama like I did in Greece, but so far I like to fix it up taking my shirt off and wrapping it over my head. I don’t do that cause I feel like an explorer, or a pirate, or Little Steven. Is just that I am bald. [caption id="attachment_2606" align="aligncenter" width="300"] 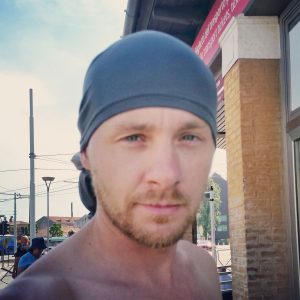 [ 6 June 2016 ] Venice. 3 pm.[/caption]7 June, Venezia ◀ Day 6 🇮🇹 ▶ One of the best places in the world, nothing to argue about that. Venice. But there’s a “but”, especially when you want to travel for a while, exploring a piece of the world: the entire world is already there. Wandering around for 3 hours on bridges and small marble paths, pushing my bicycle, I’ve been meeting all the Earth’s nationalities and ethnicities (excluding maybe Papuans, Inuits and those guys from Alto Adige). Not my place. And so in the afternoon I’ll try to reach Gorizia. [caption id="attachment_2605" align="aligncenter" width="300"] 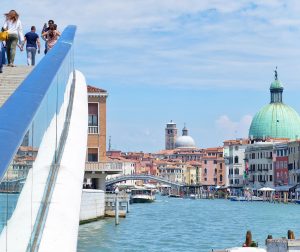 [ 6 June 2016 ] Venice. 4 pm.[/caption]8 Giugno, Gorizia ◀ Giorno 7 🇮🇹 ▶ Gorizia is little more than a citadel and is the last Italian stage where I decided I would have stopped few days, to choose the way to cross the border. In Gorizia there’s old history and a castle which has been witnessing it all the time. There I cycle for a short visit and some photos from “above”. The ticket price (3 euro) invites me to enter. For an hour I get lost alone in the silence of the halls, prisons, the permanent medieval instruments and the temporary exhibition on the centenary of the “Battle of Gorizia”. At the top of the ramparts, while I investigate the Slovenian landscapes which unfold in front of my eyes, I come across Claudio, curator of exhibitions and an incredible well of anecdotes. As I am the only customer, he takes me for a 2-hours-private tour and tells me everything about lords, customs, roads, mountains and monuments. He talks fast and rattles off too many names. I understand only the half of what he says. But when he opens the Sundial Door – “I could not, but no matter … the view is very beautiful”, he says – and shows me the Isonzo Valley and the funnel called “Door of the East” , me stealing a pic of him, I realise he’s pointing at – and I’m seeing for the first time – the path I’ll follow to exit my country. [caption id="attachment_2607" align="aligncenter" width="300"] 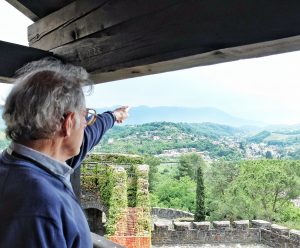 [ 8 June 2016 ] Gorizia Castle. 12 am.[/caption]“On October the 3rd there was a gorgeous lunch, in the same city of Kötschach; the Magnificent Sir Leonardo, from Prutisperch Castle in the beautiful Gail valley, Emperor’s prefect, man with great modesty and extreme refinement. The lunch was very abundant, with farmed poultry, wild birds and quadrupeds, and among other things the squirrel was served in sauce. After lunch entered the Jester of the illustrious Sir Leonardo Count of Gorizia, who sang several things accompanied with cetera and playing the cornet and made clownings with gestures and words, entertaining with its merriment all the guests, who laughed and had really a great time.” I move towards the well. Look down. A rope in the dark. And a laughing coming from the past. [caption id="attachment_2608" align="aligncenter" width="300"] 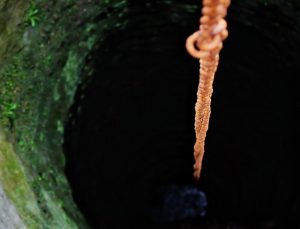 [ 8 June 2016 ] Gorizia Castle. 11 am.[/caption]9 June, Gorizia ◀ Day 8 🇮🇹 ▶ The bad weather is starting to upset my plans and to weaken my strength. My idea, after Gorizia, was to go camping on Bohinj Lake. But I don’t know exactly what to do as forecasts say lightnings and thunders are coming. My head spinning in these thoughts, I decided to pedal around 20 kms to cross the border and reach a place on Isonzo river (Soća in Slovenian) to enjoy a Ćevapćići dish and let beers suggest me what to do. Lasco (Italian word for “weak, indolent”), my mood. Lasko, my saviours. [caption id="attachment_2609" align="aligncenter" width="300"] 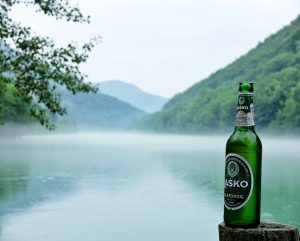 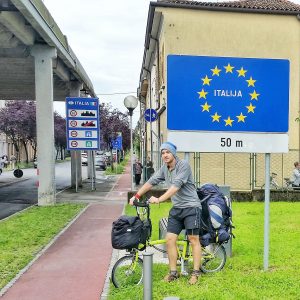